MOSCOW, August 29. /TASS/. A decision of Russia’s two-time Olympic Champion in artistic gymnastics Aliya Mustafina to return to sports after giving a birth to her daughter earlier this summer is ‘outstanding news,’ Alexander Zhukov, the president of the Russian Olympic Committee (ROC), told TASS on Tuesday. 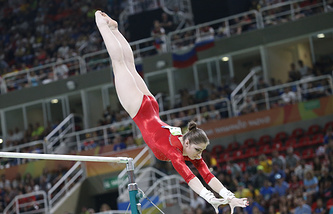 Adding up to gold medals of the 2012 and 2016 Olympics in uneven bars competition, Mustafina is seven-time Olympic medalist and three-time World Champion, including the world’s gold in All-Around Competition in Rotterdam in 2010.

Russian national team’s Head Coach Valentina Rodionenko told TASS earlier that Mustafina, who became a mother in early June, had resumed physical trainings and planned to compete at the European Championship in Glasgow in 2018.

«The return of Aliya Mustafina is good news, simply outstanding news,» Zhukov said in an interview with TASS. «Aliya is a prominent gymnast. I am glad that she made this decision and I wish her future victories.»

«There is still ample time before the 2020 Olympics (in Tokyo) and I am sure that she will have enough of time and strength to prepare for her performance at the most important international tournaments,» the ROC president said.

«This is not the first comeback to sports for Aliya (Mustafina) and she proved it with excellent performances,» Zhukov stated. «I personally handed her the awards at Rio (2016 Olympics) for her performance at uneven bars. I had no doubts about her success at that time and therefore signed up for the awarding ceremony in advance. I hope there will be more reasons in the future to do it again.»

Russian hurdles runner Shubenkov upbeat about his chances at 2020 Olympics

Mustafina also packs a total of 11 medals grabbed at the World Championships, which besides three golds also include three silver and five bronze medals in various artistic gymnastics events.