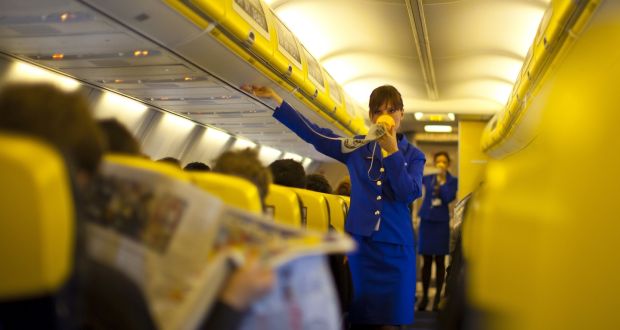 Passengers see us in our Ryanair uniforms and think we are Ryanair and are out to screw them. Sometimes the planes are delayed and we have to explain why, and they’re angry. They are right to be angry, but they are angry at the wrong people.

I see many passengers who have been angry at all the cancellations, and they are right to be angry at them, but we have been badly affected as well. I have colleagues who were on standby and called in. They had to take taxis to the airport at their own expense because public transport was not running. Then they waited three or four hours, after which the flight was cancelled, so they went home, and they won’t get any payment for that at all.

I have friends working in Ryanair’s smaller bases, bases where the number of flights are significantly cut in winter, who have been told that they will have to transfer to other bases in Europe – and cover all the costs themselves – or they will be forced to take unpaid leave for months.

Today I clocked in at 5am and finished at 3pm, with a total of five hours in the air. Those five hours are all I will get paid for even though I was at work for 10 hours

As a crew member I have no base salary and I am only paid for flying time. Today, for instance, I got up at 3am and was in the airport at around 5am. That was one hour before my first flight left. We had our briefings and went to the plane for the safety checks. Then there was the boarding. That is the hardest part, because you have to sort out all the bags and seat almost 200 people, and they are all tired, because it is very early. Then plane takes off, and it was only at that point I start getting paid.

Today I clocked in at 5am and finished at 3pm, and in that time we had flights lasting a total of five hours. Those five hours are all I will get paid for even though I was at work for a total of 10 hours.

Technically we are not allowed to use the public-address systems on the early-morning or late-night flights, but we are given no choice to use them, because we have to sell products to passengers, and if we don’t sell enough we will be disciplined; we will be called to Dublin and forced to explain ourselves.

Today on my early-morning flight the average-spend-per-passenger target was just over €1. If there are 180 people on the plane that means that the four crew have to generate sales of €180. It is almost impossible to reach that target. And they tell us that if want to get back to a base in our home country, or if we want to get promoted, or if we want to swap a day with another colleague so we can go to the wedding of our brother, then we have to reach our targets.

They don’t give us realistic sales targets. That is why on a 75-minute flight we might have three trolley services plus the gift cart plus the scratch cards.

We always bring our own food and water on the planes, but the problem is that sometimes a flight is delayed, and we might be stranded in another base or a country far away, so we will have to pay for sandwiches on board at a cost of €5. And we have to buy the bottled water at a cost of €3.