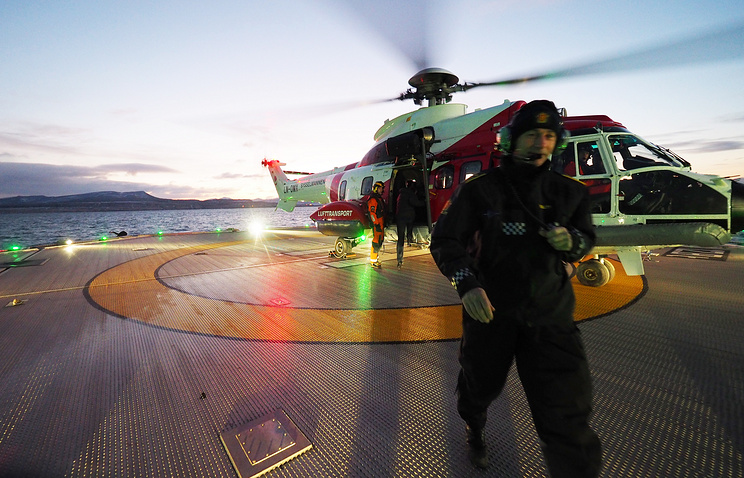 MOSCOW, October 29. /TASS/. Russian Emergencies Minister Vladimir Puchkov reported to Prime Minister Dmitry Medvedev about the search and rescue operation following the crash of a Mi-8 helicopter with Russian citizens near Spitsbergen, the press service of the Russian government said on Sunday.

Apart from that, according to the press service, Medvedev had a telephone conversation with his Norwegian counterpart, Erna Solberg. «Erna Solberg offered condolences over the death of Russian citizens in the Mi-8 helicopter crash near the Spitsbergen Archipelago and asked him to convey the words of sympathy to the relatives of those killed in the crash,» the press service said, adding that the conversation was initiated by the Norwegian side. «Dmitry Medvedev thanked the Norwegian government and Spitsbergen authorities for organizing the search and rescue operation involving Russian emergencies ministry specialists.»

«The two prime ministers noted the importance of close practical cooperation in the Arctic region and stressed mutual interest in the development of Russian-Norwegian relations,» the press service said.

A helicopter of the Conversavia airline, carrying eight people, was en route from the mothballed community of Pyramiden to Barentsburg when contact with the aircraft was lost at 15:04 local time (16:04 Moscow time). There were five crew and three employees of the Russian Arctic and Antarctic Research Institute on board the helicopter. It was in a proper technical condition and underwent maintenance before the flight, Conversavia said. All passengers and crew of the helicopter are listed as missing. On Sunday, the Norwegian side said that the presumable crash site had been traced at a depth of 209 meters in the Barents Sea some two