St. Petersburg SKA hockey team forward Pavel Datsyuk will be the captain of the team of «Olympic athletes from Russia» 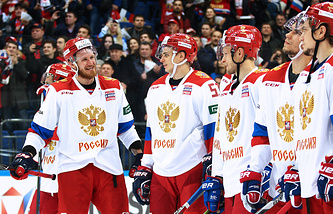 The team will head for South Korea on February 6 to prepare for the Olympics. «Datsyuk was designated as captain,» Znarok said.

Men’s ice hockey tournament will last from February 14 to 25. In the preliminary stage the team from Russia will play against Slovakia, Slovenia and the United States. National Hockey League players will be absent from the Olympics.

The International Olympic Committee (IOC) admitted 169 Russian athletes to the Games. They will compete under the Olympic flag as «Olympic athletes from Russia» in the wake of the sanctions slapped against the Russian Olympic Committee. IOC earlier announced it would not invite some leading Russian athletes to the Olympics, among who are short-track skater Viktor Ahn, biathlete Anton Shipulin, skier Sergei Ustyugov, speed skaters Pavel Kulizhnikov and Denis Yuskov, and figure skaters Ksenia Stolbova and Ivan Bukin.

The upcoming Olympics, which are the 23rd Winter Games, will take place in South Korea’s PyeongChang on February 9-25, 2018.