MOSCOW, March 26. /TASS/. World leaders have expressed their condolences after the fire at a shopping mall in the Siberian city of Kemerovo killed more than 60 people on Sunday.

Serbian President Aleksandar Vucic sent a telegram with condolences over the tragedy in Kemerovo and an offer to provide assistance to Russian President Vladimir Putin. 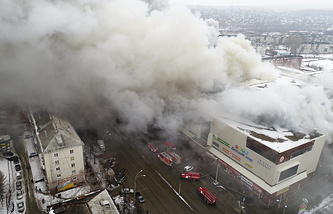 «Please accept my sincere condolences over the tragedy in Kemerovo where the awful fire claimed many lives. We were deeply shocked that many children were among those dead. Serbia, as a small country but a big friend, may provide any kind of assistance, we are ready to do what we can,» the telegram said.

German Chancellor Angela Merkel was «shocked» by the footage from the fire scene and the reports about the accident, German Government Spokesman Steffen Seibert said. Merkel «shares the grief of Kemerovo citizens and offers her condolences to them.»

Kazakhstan’s President Nursultan Nazarbayev sent a telegram to Putin on Monday, saying he was very saddened to hear the news about the tragedy. «On behalf of the people of Kazakhstan and me personally I want to convey the words of condolences and sympathy to the relatives and friends of those dead. I wish a speedy recovery to all those injured and wish them to return to their families.»

Moldovan President Igor Dodon sent a telegram to Putin saying he was deeply saddened. «The report about the death of children in this terrible tragedy is especially regrettable.»

Chinese Foreign Ministry Spokesperson Hua Chunying told TASS on Monday that the people and government of China extend their deepest condolences over numerous deaths in the shopping mall fire.