Nothing good will come out of a further standoff between Oslo and Moscow, the politician pointed out

OSLO, March 28. /TASS/. Tensions between the West and Russia need to be prevented from dropping to a Cold War level, Norway’s Prime Minister Erna Solberg told the Norwegian Broadcasting Corporation (NRK) on Wednesday. 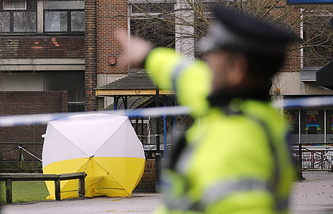 «Relations between Russia, NATO and the Western states are rather chilled at the moment but I hope that we will not go back to the Cold War era. We have not reached that particular point yet,» she said. According to Solberg, Norway is interested in keeping good relations with Russia in areas where the two countries cooperate.

On Monday, Norway followed the example of European Union countries and the United States, announcing the expulsion of one Russian diplomat over the so-called Skripal case. Solberg said that the Salisbury incident required decisive measures and it was important for the European countries to express solidarity with London.

Norway’s Foreign Minister Ine Eriksen Soreide said earlier that Oslo had received information about the Skripal case, which had led London to accuse Russia of being involved. However, those documents were not made public.

Not in neighborly way

«[The expulsion] is an unfriendly step on the part of Norway,» Russian Ambassador to Oslo Teimuraz Ramishvili said in an interview with the Aftenposten daily on Wednesday. «This is not a thing that could help our countries improve relations, which are currently far from ideal,» he added.

The Norwegian government’s decision received support among members of the left opposition parties in the country’s parliament, while politicians from the northeastern Finnmark county, which borders Russia’s Murmansk region, expressed concern over the risk of deteriorating relations. The mayor of the Sor-Varanger commune, Rune Rafaelsen, told the NRK that in case tensions continued to grow, hotheads could suggest closing the border with Russia or the Russian consulate in the town of Kirkenes, which «would be extremely harmful [for bilateral relations].»

According to head of the Norwegian Barents Secretariat Lars Georg Fordal, nothing good will come out of further standoff between Oslo and Moscow.

Skripal incident and expulsion of diplomats

A number of EU member countries, the United States, Canada and Australia earlier announced the expulsion of Russian diplomats over the poisoning of former Russian military intelligence (GRU) officer Sergei Skripal, which the UK blames on Moscow without providing any evidence. In particular, Washington expelled 60 Russian diplomats, including 48 embassy staff and 12 members of Russia’s Permanent Mission to the United Nations. In addition, the US authorities decided to close Russia’s consulate in Seattle.

The Russian Foreign Ministry stated that those unfriendly actions would not remain unanswered.

On March 4, Skripal and his daughter Yulia suffered the effects of a nerve agent in the British city of Salisbury. British Prime Minister Theresa May said the substance used in the attack had been a Novichok-class nerve agent developed in the Soviet Union. London expelled 23 Russian diplomats. Moscow rejected all of the United Kingdom’s accusations, saying that a program aimed at developing such a substance had existed neither in the Soviet Union nor in Russia. In retaliation to the UK’s steps, 23 British diplomats were expelled, the British consulate general in the city of St. Petersburg was closed and the British Council had to shut down its operations in Russia.