The best news is that Babchenko is alive, Zakharova stressed 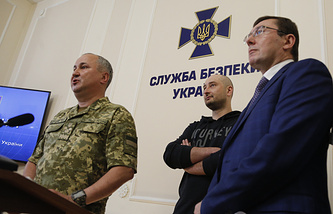 «The best news is that Babchenko is alive. Let it always happen. It is a pity that masquerade has failed in other cases. It is evident that the propagandistic effect was meant to make up the story,» she said.

Kiev police reported on Tuesday evening about an attack on Babchenko, in which he was allegedly gunned down. However, Ukraine’s Security Service (SBU) stated on Wednesday it had prevented an attempt on the life of Russian journalist Arkady Babchenko through a sting operation.

SBU Chief Vasily Gritsak told a news briefing that the Russian journalist was unhurt, after which Babchenko strolled out in front of reporters.