OSLO, July 11. /TASS/. Vandals have outraged at a monument to Soviet prisoners of war located near the town of Hamaroy in Norway’s northern Norland county, the Russian Consulate General in Kirkenes tweeted in Facebook on Wednesday.

Unknown malefactors tore down information plates the workers of the Hamaroy Military Museum placed on trees around the memorial obelisk. One of the plates contained a photo of and information on the Red Army soldier Ivan Shigalenko, who was just 21 years old when he died. 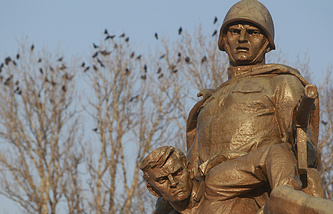 «Although the residents and authorities in northern Norway do enough to study and maintain the sites where Soviet people died during World War II, we have to state that, for the first time in Russian-Norwegian relations, an outrageous action has occurred on a Soviet military memorial,» the report said.

«The Consulate General hopes the Norwegian authorities and law enforcement agencies will do the necessary investigation on the incident and will hold the culprits to account, as well as will prevent its repetition in the future,» the Consulate General said.

The staff of the museum reacted to the incident emotionally and with indignation.

«How does it come to someone’s mind to do something like this?» the museum tweeted in Facebook. «To destroy the information we’ve gathered regarding this war is more than just vandalism. This is an outrage on all the Soviet prisoners of war who were tortured to death or killed and then buried at Tommernes [church parish] cemetery. Some people don’t have respect for anything.»

During the Nazi occupation of Norway, about 500 camps for POWs were located in this country and 212 camps of that number were meant exclusively for Soviet citizens – the captive soldiers of the Red Army and the civilians whom the Nazis had driven forcibly for coercive labor to other occupied lands.

Throughout the war, no less than 100,000 Soviet people passed through the Norwegian camps as inmates and some 13,000 of them died there.

Russian Foreign Ministry points out respectful and caring treatment of the monuments to Soviet soldiers and POWs in Norway. Reconstruction of the country’s largest memorial compound on Tjotta Island drew to completion at the end of 2016. The memorial now contains the plates with 5,000 names of the Soviet people who died there.

Researchers from Norway’s Falstad Center installed the plates in cooperation with Russian counterparts.

Still history also has rather unpleasant facts regarding the maintenance of memories of the Soviet soldiers, who died on the Norwegian territory as prisoners or liberated the East-Finnmark district from Nazi occupation.

In spite of the protests by local population, the authorities exhumed hastily and moved to Tjotta the remains of the majority of Soviet POWs, as the Norwegian government had the apprehensions the Soviet diplomats would get too many opportunities to travel around the country visiting the numerous tombs.