The Russian military has pinpointed the location where the Ilyushin-20 aircraft fell into the Mediterranean, the Russian Defense Ministry told the media on Tuesday. 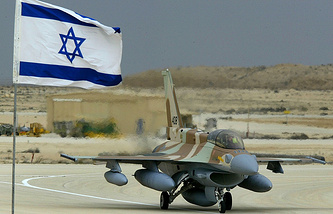 «Taking part in the search for the crew of the Russian Ilyushin-20 plane, which crashed off Latakia, are eight ships and boats from Russia’s Navy. By now, the aircraft’s crash site in the Mediterranean has been identified. It’s 27 kilometers west of Baniyas, in the Latakia province,» the Defense Ministry said.

Russian ships have picked up body fragments, personal belongings and the plane’s debris.

Seliger vessel of Project 11982 is heading to the crash scene, carrying deep submergence vehicles and also navigation and sonar gear.

Earlier on Tuesday, the Defense Ministry said a Russian military Ilyushin-20 aircraft was shot down by Syria’s air defense over the Mediterranean Sea because Israel’s F-16 fighters used it as cover. Moscow views Israeli steps, which led to the downing of the Russian military, as hostile and reserves the right to retaliate, Defense Ministry